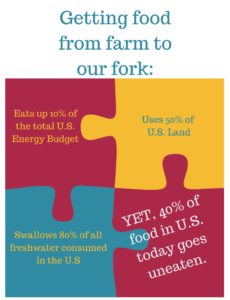 “This not only means that Americans are throwing out the equivalent of $165 billion each year, but also that the uneaten food ends up rotting in landfills as the single largest component of U.S. municipal solid waste where it accounts for a large portion of U.S. methane emissions. Reducing food losses by just 15 percent would be enough food to feed more than 25 million Americans every year at a time when one in six Americans lack a secure supply of food to their tables. Increasing the efficiency of our food system is a triple bottom-line solution that requires collaborative efforts by businesses, governments and consumers.”  National Resources Defense Council

At the exact same time – 1 in 6 Americans are Food INSECURE!

Longmont Food Rescue rescues fruits and vegetables from grocery stores, farms, farmers markets, and other local food producers. In addition to vehicle transportation, we use human power transportation, ie: bicycles. LFR’s just-in-time food rescue services allows us to be more agile than larger food banks, which enables us to deliver to our recipients faster. And because of the reduced turn-around time between donation and delivery, more food can be redirected and consumed within hours of donation that would otherwise be thrown away.